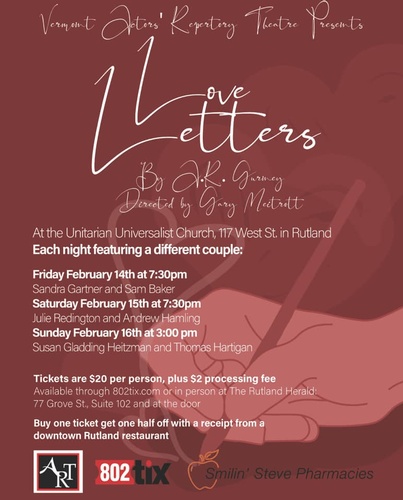 Event Description:
Vermont Actors” Repertory Theatre celebrates Valentine’s Day weekend with the production of “Love Letters” by A.R. Gurney on February 14th, 15th at 7:30 p.m. and February 16th at 3 p.m. at the Unitarian Universalist Church, 117 West Street in Rutland. The two-actor play will be presented by three different couples, with each performing one show. On February 14th, the show will feature Sam Baker and Sandra Gartner, February 15th will be Andrew Hamling and Julie Redington and on February 16th Susan Gladding Heitzman and Thomas Hartigan. Andrew Makepeace Ladd III and Melissa Gardner are both born to wealth and position. They write to each other through invitations, thank-you notes and summer camp postcards. Romantically attached, they continue to exchange letters through boarding school and college years. While Andy goes off to war, Melissa marries, but her attachment to Andy remains strong and she continues to keep in touch as he marries, becomes a successful attorney, gets involved in politics and is elected to the U.S. Senate. Meanwhile, Melissa dabbles in art, enters into destructive relationships, drinks and becomes estranged from her children. “Love Letters” is directed by Gary Meitrott, who has directed two previous shows for ART, “Steel Magnolias” and “Alabama Story.” The play is designed to be read aloud by two actors, who sit side by side at separate tables throughout the production. They read letters to each other over a lifelong correspondence, beginning with a birthday party invitation in elementary school and ending when they are adults who have followed different paths. Although they weren’t together very often physically throughout the years, they meant everything to each other and “were spiritually as close as only true lovers can be.”
Location:
Vermont Actor's Repertory Theatre
117 West Street, Rutland, Vermont 05701
Date/Time Information:
Friday, February 14, 2020 at 7:30 PM
Contact Information:
Call (802) 775-0903
Send an Email
Fees/Admission:
Tickets are $22 (including $2 handling fee) per person. Advanced tickets can be purchased at: 802Tix.com, actorsreptvt.org or in person at “The Rutland Herald”, 77 Grove Street, suite 102, Monday thru Friday from 9 a.m. to 5 p.m. or at the door. ART is offering a BOGO with a receipt from any downtown Restaurant, buy one full price ticket and get the second one for half price. Visit the company on Facebook at: www.facebook.com/actorsrepepvt.org.
Set a Reminder:
Business Directory Events Calendar Perks Deal Weather Join The Chamber